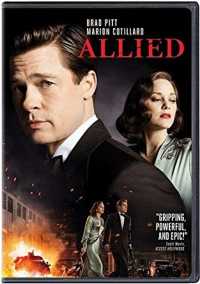 Allied is a 2016 war film directed by Robert Zemeckis and written by Steven Knight. It stars Brad Pitt as a Canadian intelligence officer and Marion Cotillard as a French Resistance fighter and collaborator who fall in love while posing as a married couple during a mission in Casablanca. Jared Harris, Simon McBurney and Lizzy Caplan also star. Principal photography began in February 2016 in London. The film premiered in London on November 21, 2016[4] and was released in the United States on November 23, 2016 by Paramount Pictures. It received mixed reviews from critics, although Pitt and particularly Cotillard’s performances were praised, and grossed $120 million worldwide. It also received an Academy Award nomination for Best Costume Design.