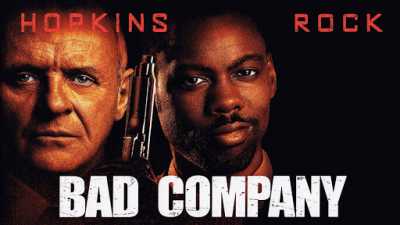 Bad Company is a 2002 American-Czech action comedy thriller film directed by Joel Schumacher, produced by Jerry Bruckheimer and starring Anthony Hopkins and Chris Rock. The film became somewhat famous for its connections to the September 11th terrorist attacks; amongst other things, it was the last major production to film inside the former World Trade Center. The film plot, written years before the attacks, involved a variety of Serbo-Balkan extremists (including a man from Afghanistan) planning a huge attack in New York City. The movie’s release date was moved out of its late 2001 spot and into a summer 2002 release, similar to several other films with terrorism or violent crime-related stories, including Collateral Damage and Training Day.