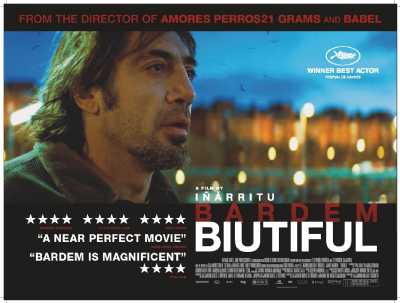 Biutiful is a 2010 drama film directed, produced and co-written by Alejandro González Iñárritu and starring Javier Bardem. This film was González Iñárritu’s first feature since Babel (2006) and fourth overall, and his first film in his native Spanish language since his debut feature Amores perros (2000). The film was nominated for two Academy Awards in 2011: Best Foreign Language and Best Actor for Javier Bardem; his nomination was the first entirely Spanish-language performance to be nominated for the award. Bardem also received the Best Actor Award at Cannes for his work on the film.