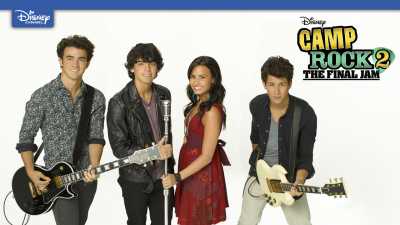 Camp Rock 2: The Final Jam is a 2010 Disney Channel Original Movie and the sequel to the 2008 film Camp Rock. The film premiered on Disney Channel on September 3, 2010. A year after the events of the previous film, Mitchie Torres returns to Camp Rock for another summer year, along with her friends and her love-interest Shane Gray and his brothers of the rock band “Connect 3” (Nate and Jason). Along the way, she and her mother Connie notice that a new camp, Camp Star, has opened across the lake. Mitchie and her friends also notice that there are fewer campers than last year, and attempt to lift everyone’s spirits at the Opening Jam (“Brand New Day”). Camp Star sends parachutes to Camp Rock with chocolates and marshmallows, inviting them to a bonfire at their camp, but Brown Cesario is less than enthusiastic, as Camp Star’s director is Axel Turner, whom he once kicked out of his rock band, the “Wet Crows”.