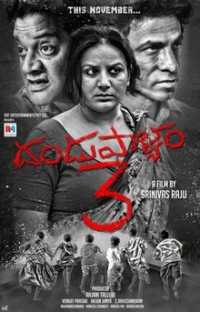 Dandupalya 3 or 3 is an 2018 Indian Kannada-language crime thriller film directed by Srinivasa Raju and produced by Ram Talluri. Based on the infamous dacoit gang from Dandupalya, the film is a sequel to the 2017 critically acclaimed film Dandupalya 2 and is third film in the series. The film stars Pooja Gandhi, continuing her role from the prequels and most of the principal cast including P. Ravishankar, Makarand Deshpande, Sanjjanaa, Ravi Kale and Petrol Prasanna reprise their roles from the previous films. The film’s score and soundtrack is composed by Arjun Janya and cinematography by Venkat Prasad. The film is dubbed into Telugu language and is entitled Dandupalyam 3. Much of the crew members have been retained for the film from the prequels apart from roping in Naveen Krishna, Tabla Nani, Ramesh and Gururaj Desai to pen the dialogues. The film would mark the end of the franchise.