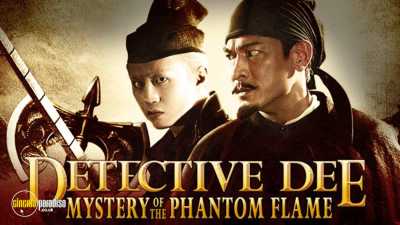 Detective Dee and the Mystery of the Phantom Flame is a 2010 Chinese-Hong Kong action-adventure mystery film directed and produced by Tsui Hark. The film tells a fictional story featuring Di Renjie (Andy Lau), one of the most celebrated officials of the Tang Dynasty, who is tasked by the Empress Wu Zetian (Carina Lau) to solve a series of inexplicable murders in which victims suddenly burst into flames. Principal photography for Detective Dee began in May 2009; the film was shot at Hengdian World Studios in Zhejiang, China. It features art direction and fight choreography by Sammo Hung, and co-stars Li Bingbing, Deng Chao with Tony Leung Ka-fai making a special appearance. Detective Dee was released in China on 29 September 2010 and in Hong Kong on 30 September 2010; in North American, it premiered at the 2010 Toronto International Film Festival.