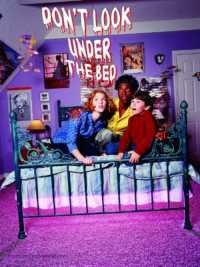 Don’t Look Under The Bed is a 1999 Disney Channel Original Movie (DCOM) directed by Kenneth Johnson. Frances McCausland (Erin Chambers), an intelligent and level-headed girl, is starting high school a year early. Strange things have been going on in her town of Middleberg: dogs appearing on people’s roofs, alarm clocks going off hours early, eggs all over a teacher’s car, gelatin in the school swimming pool, and the letter “B” spray-painted all over town. The Bs also appear on the school lockers—except for Frances’, which has a B on the inside. These pranks seem to point to Frances, who does not understand what is happening or why. An older boy named Larry Houdini (Eric “Ty” Hodges II) offers to help Frances.