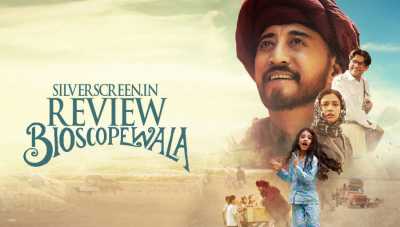 Bioscopewala (English: Man with a Bioscope) is an Indian Hindi drama film directed by Deb Medhekar and produced by Sunil Doshi. The film stars Danny Denzongpa and Geetanjali Thapa in lead roles and had its world premiere at the 30th Tokyo International Film Festival on 28 October 2017. The film is an adaptation of Nobel Laureate Rabindranath Tagore’s short story Kabuliwala and is scheduled to release on 25 May 2018 in India.[2] The Official Trailer of the film was released on YouTube by Fox Star Studios on 8 May 2018. Bioscopewala has taken forward the timeline of Kabuliwala, the original story written by Rabindranath Tagore, from the 19th century to somewhere in the 1980s during the Taliban regime and changed the profession of Rehmat, the central character, from a dry fruit seller to a man who goes around showing films to children through his Bioscope.