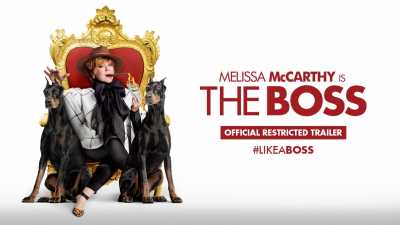 The Boss is a 2016 American comedy film directed by Ben Falcone and written by Falcone, Melissa McCarthy and Steve Mallory. The film stars McCarthy, Kristen Bell, Ella Anderson, Tyler Labine, Kathy Bates, Annie Mumolo, Timothy Simons and Peter Dinklage, and follows a millionaire who, after being arrested and losing her money, uses her assistant’s daughter’s Dandelion Girls cookie sales to return to the top. The film was released on April 8, 2016, by Universal Pictures, received generally negative reviews from critics and grossed $78 million worldwide.

The story follows Michelle Darnell, a titan of industry who is sent to prison for insider trading, denounced by her former lover, Renault, who still holds a heavy grudge towards her for their breakup, after getting a promotion a few years ago. After doing her time, Michelle emerges, ready to rebrand herself as America’s latest sweetheart, but not everyone she steamrolled is so quick to forgive and forget. With nowhere to go and no one to scam, Michelle is forced to move in with former assistant Claire and her young daughter, Rachel. Now at her lowest point, Michelle wastes no time in devising a winner-take-all plan to rebuild her empire.