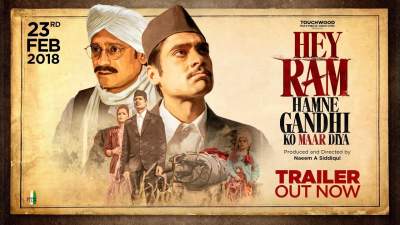 Hamne Gandhi Ko Maar Diya is set in the year 1948 revolving around a family which is highly in debts. Kailash (Jatin Goswami) is not happy by the way Mahatma Gandhi has been helping Muslims to settle down with the partition. His disturbed past with his mother makes him realise what he’s missing in life.

Following this he takes his wife (Samiksha Bhatnagar) and daughter to his native place. During the train journey to his village he meets people with varied set of thinking. Most interesting from them is Divakar Tripathi (Subrat Dutta) who is a die-hard follower of Gandhi’s ideology. Rest of the story revolves around the incidents that happen during the journey.

The script is too lazily penned which results the proceedings to take a preachy route. Given the story is already fill with enough historic references, the script does no good to light down the moments. After a point of time it gets boring. What keeps the movie binded till the end is few decent performances by the cast.

The sequence of selling water labelling them as Hindu & Muslim are well shown but the buildup for it is too old-aged. Inclusion of a pretty lengthy song portraying the teachings on Lord Rama does a lot of damage in the pace. Some moments are too unrealistic and melodramatic to believe.