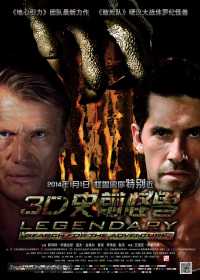 Legendary is a 2010 drama film directed by Mel Damski. The film stars Devon Graye as a high school wrestler, in a cast that features John Cena, Patricia Clarkson, Danny Glover, Madeleine Martin, and Tyler Posey. The film was released on September 10, 2010. A sequel to the film was announced on the 25th of April 2018 scheduled to be released this fall. After being bullied, book-smart (but not street-wise) teenager Cal Chetley (Devon Graye), joins his Oklahoma high school’s wrestling team, seeing it also as a way to reunite with his estranged and wayward brother, Mike (John Cena). His mother, Sharon (Patricia Clarkson), is not initially supportive of Cal’s decision, especially when she discovers that Mike is secretly coaching Cal after she gets a call from Mike Chetley’s jail cell. She has been away and without contact of her older son, Mike, for over 10 years, but copes and watches yet another family male become legendary.