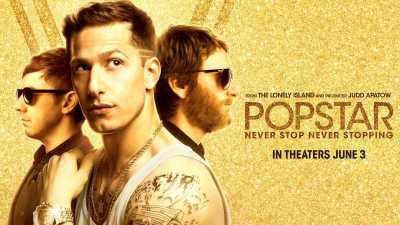 Told in the form of a musical documentary, Conner Friel (Andy Samberg) is a musical prodigy at an early age, and he forms a rap group, The Style Boyz, with his childhood friends Lawrence (Akiva Schaffer) and Owen (Jorma Taccone). They almost instantly gain fame in the music industry, inspiring many of today’s musicians. However, failing to receive credit for writing Conner’s guest verse on the Poppy-winning single “Turn Up the Beef”, Lawrence leaves.

Universal Pictures’ Popstar: Never Stop Never Stopping is headlined by musical digital-shorts superstars Andy Samberg, Akiva Schaffer and Jorma Taccone, collectively known as The Lonely Island. The comedy goes behind the scenes as singer/rapper Conner4Real (Samberg) faces a crisis of popularity after his sophomore album flops, leaving his fans, sycophants and rivals all wondering what to do when he’s no longer the dopest star of all. The latest comedy from blockbuster producer Judd Apatow (Trainwreck, Superbad, Knocked Up) co-stars Sarah Silverman, Tim Meadows and Maya Rudolph and many of the biggest names in comedy and music in cameo performances.