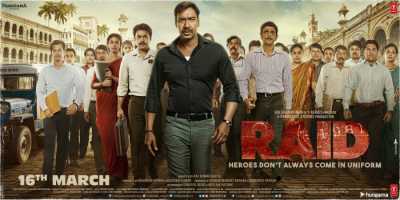 Raid is a 2018 Indian period crime thriller film written by Ritesh Shah and directed by Raj Kumar Gupta. It features Ajay Devgn, Ileana D’Cruz, Saanand Verma and Saurabh Shukla. The principal photography of the film commenced at Lucknow and Raebareli in September 2017. The film released worldwide on 16 March 2018 with positive reviews from the critics. The film is inspired by the the real life I-T raids that were conducted by Indian Revenue Services back in the ’80s