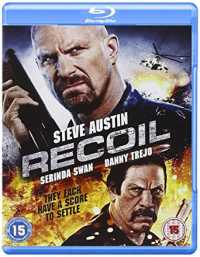 Recoil is a 2011 Canadian action film directed by Terry Miles and starring Steve Austin and Danny Trejo. The film was released on direct-to-DVD and Blu-ray in Canada on March 1, 2011. The film is about a cop turns vigilante after his family has been murdered, exacting vengeance on the killers and then on all criminals who have slipped through the system.

Ryan Varrett (Steve Austin), is an ex-cop determined to avenge the murder of his family. In 2009, when Ryan was a cop in Dallas, Texas, his wife Constance Marie Varrett (Rebecca Robbins) and 9-year-old son Matt Ryan Varrett (Connor Stanhope) were viciously killed by a gang. Ryan survived the assault and killed three of the gang.