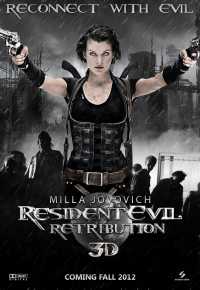 Resident Evil: Retribution is a 2012 action horror film written and directed by Paul W. S. Anderson. It is the fifth installment in the Resident Evil film series based on the Capcom survival horror video game series Resident Evil, and the third to be written and directed by Anderson after the first film and the previous installment. Resident Evil: Retribution is a direct sequel to the previous film Resident Evil: Afterlife, and focuses on Alice (Milla Jovovich) captured by the Umbrella Corporation, forcing her to make her escape from an underwater facility in the Extreme North, used for testing the T-virus. The film has many returning actors and characters, along with new characters from the video games not featured in the previous films. Filming took place from October to December 2011 for an international release date of September 14, 2012.