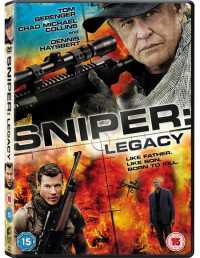 Sniper: Legacy is a 2014 American direct-to-video action film directed by Don Michael Paul. It is the fifth installment in the Sniper film series. After military leaders are assassinated, Brandon Beckett (Chad Michael Collins), receives word that his father, Thomas Beckett (Tom Berenger), was among the assassinated. Attempting to track down David Simpson (Doug Allen), the assassin, a renegade 75th Ranger Regiment sniper, Brandon finds out that his father isn’t dead and realizes that he is being used as bait.