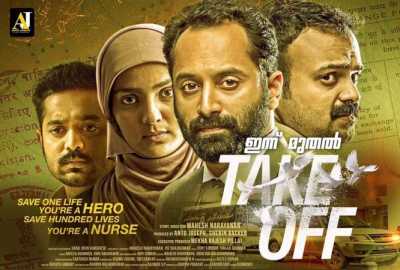 Take Off is a 2017 Indian political drama thriller film, based on the ordeal of Indian nurses in the city of Tikrit, Iraq, in 2014. The film is the directorial debut of editor Mahesh Narayan, with Parvathy , Kunchacko Boban and Fahadh Faasil starring in the lead roles. It is written by Mahesh Narayan and P. V. Shajikumar. The film was shot in various parts of Dubai and Kerala. Take Off was released on 24 March 2017. The film was a blockbuster at the box office. The film won a Special Jury Award at the 48th International Film Festival of India and Parvathy won the award for Best Female Actor, becoming the first ever Indian film actor to win the award. For her most notable performance as Sameera, Parvathy also received her second Kerala State Film Award for Best Actress, a second Filmfare Award for Best Actress – Malayalam and her first Special Jury Mention at the National Film Awards.