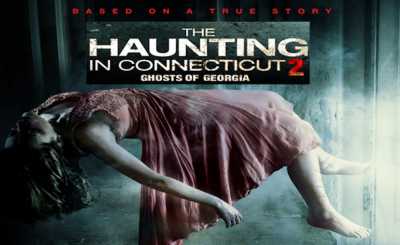 The Haunting in Connecticut 2: Ghosts of Georgia is a 2013 psychological horror film that serves as a brother film to The Haunting in Connecticut by Gold Circle Films. The script was written by David Coggeshall and Tom Elkins served as director. It was released in a limited theatrical run, and through video on demand, on February 1, 2013. The story was inspired by the events surrounding the Wyrick house of Ellerslie, Georgia, which were published in the book The Veil: Heidi Wyrick’s Story. The film is set in 1993. Andy and Lisa Wyrick, along with their daughter Heidi, move into a rural home after receiving a deal from the bank. They are told that no one had previously lived on the land, which is why they are getting such a great deal. Shortly after moving in, Heidi begins to experience visions. After a visit from Lisa’s sister Joyce, it is revealed that Heidi, along with her mother, aunt, and grandmother, was born with a veil over her face, allowing the women of the family to have visions. Joyce embraces her visions, but Lisa tries to prevent them with the help of medication to no avail as she begins to have nightmares and visions of her mother.