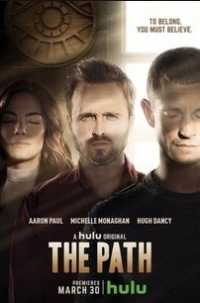 The Jason Katims-produced drama starring Aaron Paul, Michelle Monaghan and Hugh Dancy will not return for a fourth season. It’s the end of the road for Hulu’s The Path.

The streamer has opted to cancel the Jason Katims-produced drama after three seasons and 36 episodes.

“While it’s sad that The Path is ending, I’m brimming with gratitude and pride,” creator Jessica Goldberg said Tuesday in a statement. “It was a gift to be able to tell challenging and emotional stories for three seasons in this very strange and unique world. The caliber of talent and passion everyone who worked on this show brought — from my partners Jason Katims and Michelle Lee, the execs at Hulu, the writers, actors, directors, designers and crew — was something to behold, and for which I’m very thankful. Thanks Hulu and Universal Television for taking a shot on this show, it was a life-changing experience.”