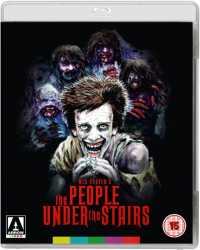 The People Under the Stairs is a 1991 American horror comedy film written and directed by Wes Craven and starring Brandon Adams, Everett McGill, Wendy Robie, A. J. Langer, Ving Rhames, and Sean Whalen. The plot follows a young boy and two adult robbers who become trapped in a house belonging to a strange couple after breaking in to steal their collection of rare coins. Craven has stated that The People Under the Stairs was partially inspired by a news story from the late 1970s, in which two African-American burglars broke into Los Angeles household, inadvertently causing the police to discover two children who had been locked away by their parents. The film was a surprise commercial success and has received generally mixed to positive reviews from critics and audiences, and has been analyzed for its satirical depiction of gentrification, class warfare, and capitalism.