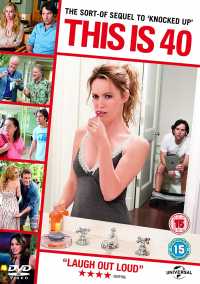 This Is 40 is a 2012 American comedy film written, co-produced and directed by Judd Apatow, and starring Paul Rudd and Leslie Mann. It is the spin-off sequel of Knocked Up, which starred Seth Rogen and Katherine Heigl. Filming was conducted in mid-2011, and the film was released in North America on December 21, 2012. The film follows the lives of middle-aged married couple Pete and Debbie as they each turn 40, with their jobs and daughters adding stress to their relationship. This Is 40 received mixed reviews from critics, who praised its cast, acting (particularly Mann, Rudd and Fox) and the film’s comedic moments and perceptive scenes, but criticized the film’s overlong running time and occasional aimlessness.