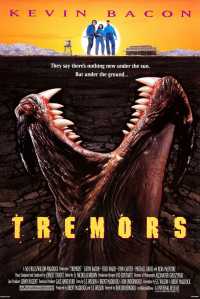 Tremors is a 1990 American monster film directed by Ron Underwood, produced by Gale Anne Hurd, Brent Maddock, and S. S. Wilson, and written by Maddock, Wilson, and Underwood. Tremors was released by Universal Pictures and stars Kevin Bacon, Fred Ward, Finn Carter, Michael Gross, and Reba McEntire. The film is the first installment of the Tremors franchise, and was followed by four direct-to-video sequels: Tremors 2: Aftershocks (1996), Tremors 3: Back to Perfection (2001), Tremors 5: Bloodlines (2015) and Tremors: A Cold Day in Hell (2018) and a direct-to-video prequel, Tremors 4: The Legend Begins (2004). A television series titled Tremors: The Series, aired from March through August 2003. A sixth film, Tremors: A Cold Day in Hell, was released in May 2018.