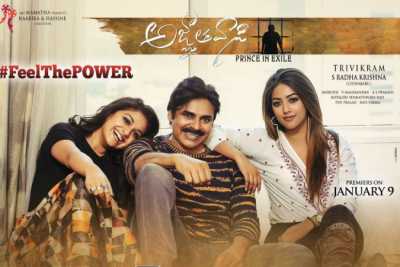 Agnyaathavaasi (lit. Prince in exile) is a 2018 Indian Telugu-language romantic action drama film directed by Trivikram Srinivas and starring Pawan Kalyan, with Keerthy Suresh, Anu Emmanuel, Aadhi Pinisetty, Kushboo, and Boman Irani in supporting roles. The film began principal photography on 3 April 2017. Aadhi Pinisetty played the main antagonist and Bollywood actor Parag Tyagi debuted as a villain. Work on the film commenced under the working title PSPK25, with the final release name revealed on 27 November 2017. The film was released on 10 January 2018, during the Sankranthi festival weekend. Upon release, the film received negative reviews from critics and audiences. The film did well at the overseas box office and it underperformed at the domestic box office. It was declared an box office flop.