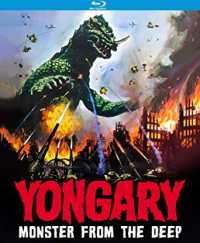 Yongary, Monster from the Deep (Hangul “Taekoesu Yongary”; lit. Great Monster Yongary) is a 1967 science fiction kaiju film featuring Yonggary, directed by Kim Ki-duk, with special effects by Kenichi Nakagawa. The film was a South Korean-Japanese co-production between Keukdong Entertainment Company and Toei Company. The film was produced to rival the success of Toho’s Godzilla series and featured the same techniques of practical special effects filmmaking used in Godzilla films and other Kaiju films utilizing suitmation, pyrotechnics, and miniature sets. The film opened in Seoul, South Korea on August 13, 1967 and released direct to television in the United States by American International Television in 1969 as Yongary, Monster from the Deep.[6] In 1999, filmmaker Shim Hyung-rae released a reimagining of his own titled Yonggary.